Are you looking for a good cloudy day tour in Phuket?

Then look no further than the must do half-day tour of Phuket Town, a self-guided walk through the old part of town around Thalang, Dibuk and Krabi Roads. The beautiful Sino-Portuguese architecture in these timeless enclaves harks back to the charm of a century ago.

As far back as the 18th century Chinese immigrant merchants who got rich from Phuket tin-mining profits naturally also started building homes. Though the very richest commissioned enormous mansions, a number of which survive in Phuket Town today, the vast majority built highly practical terraced shop-houses in the heart of the commercial district. Phuket Town retains many of southern Thailand’s oldest and finest examples, several of which are open to the public.

Some of the best examples of the larger mansions include ‘The House of the Beautiful Images’ on Soi Rommanee, which a café with exhibition space for photography. In addition there is also ‘The Dibuk Grill and Bar’ on Dibuk Road, and ‘The China Inn Café & Restaurant’ on Thalang Road.

Other historical architectural places of interest are Phuket Provincial Hall built at the beginning of the 20th century. This large building is open to the public apart from on special occasions. Then there is also the Phuket Philatelic Museum, located inside an 80-year-old building on Montri Road. This stamp museum looks amazing from the outside and the interior is under development but still open for the public at no entrance fee.

No one knows exactly when the first buildings of Sino-Portuguese origin were constructed, but old photographs from the reign of King Rama V (1853-1910) suggest the design genre was already well established by then.

By the early 20th century the then Phuket Governor invited major European mining companies to construct major public infrastructure such as roads and canals and the architectural evolution soon followed.

Shop house design evolved from a standard prototype favoured by the mixed-race Chinese–Malay (‘Baba’, or ‘Straits Chinese’) immigrants from Melaka and other parts of the Malay Peninsula. It’s a style now widely dubbed Sino-Portuguese because Melakan architecture of the time was itself strongly influenced by the territory’s Portuguese former colonists, though it also incorporates traits from Dutch and Anglo-Indian colonial architecture.

Juxapose this with the uber modern, award winning and nautical-influenced architecture of Kata Rocks and you have a visual treat for eyes. We hope you stay with us and take time to tour historical Phuket Town during your visit. 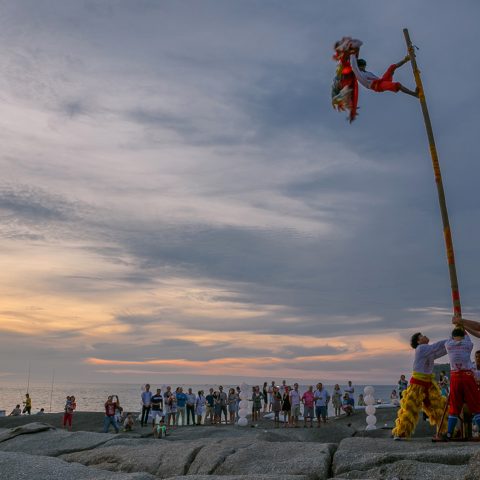 Thailand is currently gearing up for the Chinese New Year (CNY), which starts on 22 January 2023. Also known as the Spring Festival, It is the beginning of a new year on the traditional Chinese lunisolar calendar. This year is the ‘Year of the Rabbit’. CNY is one of the most important holidays in Chinese...Read more 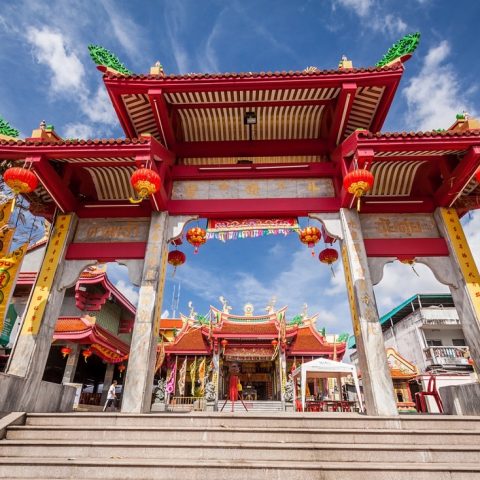 One of the most popular and remarkable festivals in Phuket, the Vegetarian Festival is one not to be missed when you find yourself on the island in September. Originating from Taoism in China, this annual 9-day festival on the 9th lunar month of the Chinese calendar involves not only refraining from eating meat but also...Read more

Rawai and Chalong are becoming the vegan & health food hubs of Phuket. A new generation of boutique eateries are committed to quality & diverse menu options...Read more

It is never too early to make your Festive Season 2017/2018 plans at Kata Rocks. The resort is proud to announce its outstanding lineup of events, starting on Christmas Eve...Read more